Bhagvad Gita The Ultimate Knowledge of the Supreme Atman 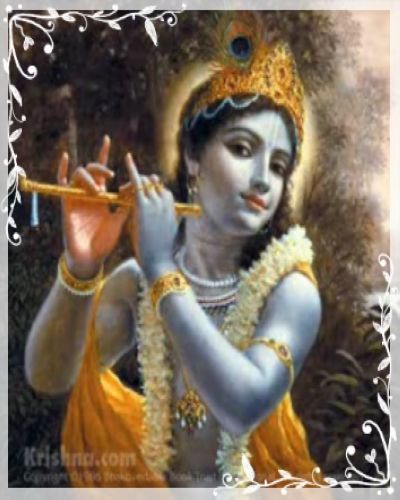 The Greatness of Gita

The Bhagvad Gita Song of the Divine

Truly speaking none has the power to describe in words the glory of Gita ; for it is a book containing highest esoteric doctrines. It is the essence of Vedas ; its language is so sweet and simple that man can easily understand it after a little practice ; but the thoughts are so deep that none can arrive at their end after constant study through out a life time.

These seven slokas in this order from Bhagawad Gita has been published by Gita press, Gorakpur, in their collection of stotras called Stotra Ratnavali. It is supposed to represent in a nutshell the teachings contained in the 700 slokas of Bhagawad Gita.

The God said:
He who, meditates on me,
As Om, which in Brahman,
While leaving this ephemeral body,
Will surely attain the most supreme state.

Arjuna said:
In this state, Oh Lord, Singing about you.
The world is happy and is rejoicing,
To see the evil ones flying away with fear,
And all those devoted ones saluting you.

[This is told after seeing the Viswa Roopa of the Lord.]

Think of Him, as ancient, spread everywhere,
Ruler of all, much subtler part of an atom,
Protector of all with his form which is beyond thought,
With the colour of Sun and transcendental beyond dark thoughts.

With roots above and branches Growing down,
This Banyan tree with Vedas as its leaves,
Is everlasting and immortal,
And whosoever knows it, really knows the Vedas.

I live in everybody’s heart,
And from me one gets,
Memory, wisdom and forgetfulness,
And for all the Vedas, I am the one that is to be known,
For I created them and I am the one who knows them.

Concentrate your mind on me,
Always show devotion to me,
Sacrifice for me, salute me,
And I swear to you because you are dear to me,
That definitely you will reach me.

1: Arjun vishaad Yoga “The Yoga of Dejection of Arjuna”

2: Sankhya Yoga “The Yoga of knowledge”

4: Gyaan KarmaSanyasa Yoga “The Yoga of Knowledge as well as the disiplines of knowledge and action”

5: Karma-Sanyasa yoga “The Yoga of action and knowledge”

6: AtmasayamYoga “The Yoga of self control”

11: Vishwaroopa Darshan Yoga “The Yoga of the Vision of the Universal Form”

12: Bhakti Yoga “The Yoga of Devotion”

13: Kshetra Kshetragya Vibhaag Yoga “The Yoga Of discrimination between kshetra and the Knower of Kshetra”

15: Purushouthama Yoga “The Yoga of the Supreme Person”

18: Moksha Sanyasa Yoga Conclusion- The Perfection of Renunciation ” The Yoga of liberation through th path of Knowledge and Self-surrender” 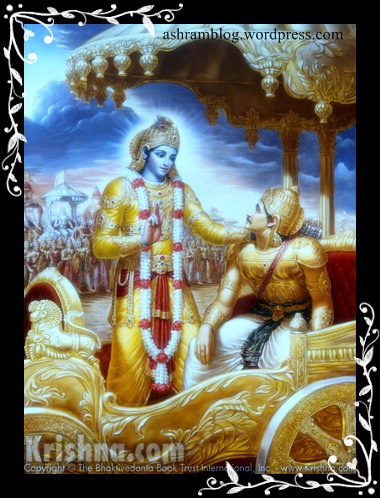